Some stiles have been changed for gates

This section of the the Darent Valley Path passes through the fields and alongside the banks of the river towards the picturesque centre of Shoreham.

Excellent scenery surrounds Meenfield Wood and the hill climbs are rewarded with dramatic views across the valley towards the hop gardens and lavender fields in the distance. Shoreham Memorial Cross is carved into the hillside, highlighting the chalk below.

The walk skirts the fairways of the Lullingstone golf club and winds downhill through the park to reveal glimpses of the grand Lullingstone Castle ahead.

Castle Farm is one of the biggest lavender growers in the UK. Lavender products, including speciality foods, are available at the farm’s Hop Shop which concentrates on selling local produce. The Castle Farm Lavender Festival is usually on the second weekend in July with tours, food tastings, beekeeping displays, aromatherapy and more.

Hops have been grown in the Darent Valley for centuries to flavour the beer produced by the many breweries that used to flourish alongside the river.

Hop bines are traditionally used for decorating old farmhouse kitchens and bars in inns and hotels as they are thought to bring good fortune.

The word lavender comes from Latin ‘lavare’ – to wash (which is also the origin of the word ‘laundry’) and derives from its use by the Romans. The plant’s aromatic oils have long been prized for their domestic, medicinal and culinary uses, which is why lavender has remained popular throughout the centuries.

The 15th century gatehouse at Lullingstone Castle was one of the first in the country to be built of brick. Both Henry VIII and Queen Anne are known to have been regular visitors.

From the Visitor Centre follow the signs to the Darent Valley Path across the fields towards the banks of the river. Continue alongside the river to the picturesque centre of Shoreham and past the Kings Arms public house.

Take the footpath just past Shoreham Aircraft Museum, signposted to Halstead and Timberden Bottom (The Landway). Follow the path uphill taking time to turn back and savour dramatic views across the valley and Shoreham below.

At the top, Meenfield Wood offers an excellent resting point and an opportunity to enjoy the scenery and grassland wildlife before heading downhill to skirt the top of the Shoreham Memorial Cross carved into the hillside and on through the woods.

Follow up tree-lines Cockerhurst Road to take the footpath on the right and follow the route along the field edge, into Redmans Lane. After a short distance, turn right, and take the steps into a field.

Keep to the left, crossing over a stile and follow along an enclosed path to a gate.

Go through the gate into Beecham Wood, Lullingstone Park and across the fairway to the main entrance of the golf club car park to pass through a kissing gate and follow the path into the fields beyond.

Continue through the woodland before coming once again into the open to walk along the field edge. Look ahead as the path winds downhill to catch glimpses of Lullingstone Castle in the distance.

The waymarked path continues to wind downhill and offers stunning views of Eynsford Viaduct before turning to pass directly in front of Lullingstone Castle. A kissing gate leads back to the banks of the river and the Visitor Centre. 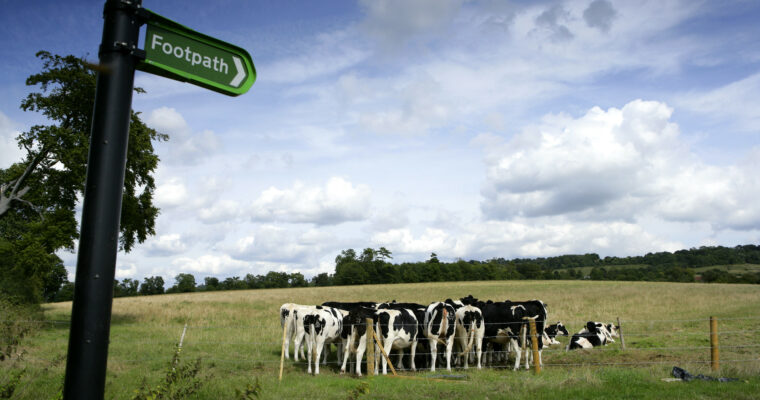